Soil pressures: an economic and ecological overview of the agricultural sector in Peru (2000-2015)

Abstract: Given the development of the different streams of innovation in the agricultural sector worldwide, it is relevant to contrast the progressive vision of economic growth and increase in agricultural productivity with other holistic visions. These integral visions propose increasingly better tools to emphasize human relationships with nature, while measuring their socio- environmental effects and put forward new forms of interaction. The following study presents innovation perspectives for the Peruvian agricultural sector and applies the Multi-Scale Integrated Analysis of Societal and Ecosystem Metabolism (MuSIASEM), which results show its sustainability, particularly an overview of soil degradation. This tool will provide a quantitative description of pesticide and insecticide flows generated by agriculture in Peru and propose an explanation of their effects on the environment.

Agriculture has allowed the large-scale development of society since the Neolithic. It has permanently increased its scale and complexity by incorporating new technologies and responding to world demands.

According to Trigo, Mateo & Falconi (2011), since the nineties, after a long period of separatist policies on agriculture and few incentives for research worldwide, it has been possible to start reassessing it as a source of economic contribution and its relation to environmental and social problems (such as those related to food security) that arise from its development. According to IADB (Trigo, Mateo & Falconi, 2011) there are three medium-term challenges: a 70% increase of food demand, detriment of natural resources, as well as climate change effects and high prices of fossil fuels.

Different tools, derived from conventional to holistic approaches, are used to solve agricultural problems of the twenty-first century. Those approaches could be divided into two relevant strands: the systemic and the holistic strands. 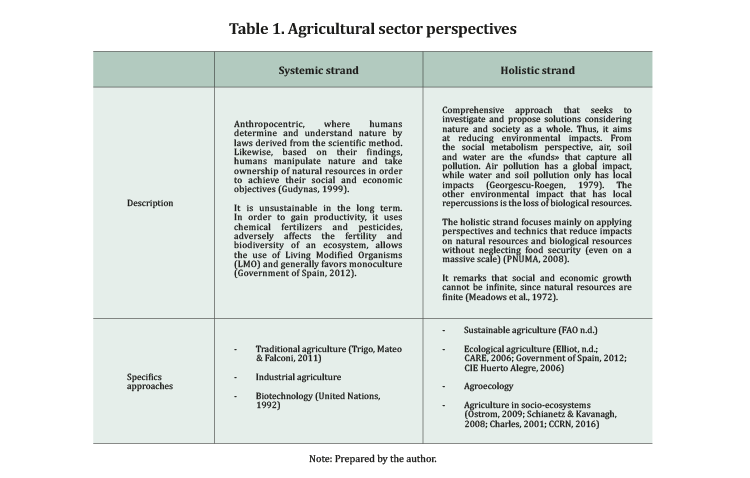 The Multi-Scale Integrated Analysis of Societal and Ecosystem Metabolism (MuSIASEM) allows underlining the system patterns of socioeconomic metabolism, characterizing them in different stages. In particular, it focuses on performance characterization of economic activities (for households, enterprises, economic sectors and national economies) and associated ecological restrictions (Giampetro et al., 2009). In few words, this methodology allows analyzing sustainability of economic activities organized in a multi- level structure and scales, and it represents this hierarchical structure. First, it is society as a whole, at «n» level of analysis. Second, at n-1 level, society is divided into paid labor and households. Since households are only consumers, there is not another level of analysis for this compartment. However, at n-2 level paid labor is divided into labor in the primary and secondary sectors, and the government and service sector. At the n-3 level of analysis, the productive sectors are divided into primary flows sector and construction / manufacturing. The n-4 level of analysis focuses only on extractive activities of natural resources, such as agriculture, mining and energy. Thus, the agricultura sector is conceived as part of a hierarchical structure of society. Transformed resources could be analyzed per sector, at every level, or as a whole. 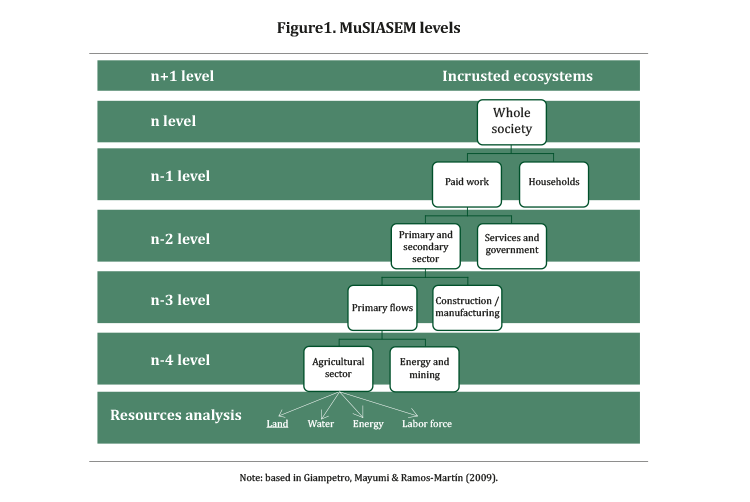 It is important to analyze these two new indicators against other measures related to economic activity. The next figure shows the evolution of GDP per capita and the total use of chemical fertilizers and pesticides. Their growth rate was 8% and 1%, respectively, and the first had more variance than the other.

Finally, in this section, I present several estimations to recognize these new indicator relations. The following figure collects 6 equations where the total amount of chemical products on the soil, i.e. chemical fertilizers and chemical pesticides, are dependent variables. Other indicators such GDP, square of GDP, GDP per capita and its square are independent. The estimation method was by least squares with robust standard errors to fix heteroscedasticity.

Pollution and economic activity are directly related with 99% confidence (equations 1,3,5). This result shows that the more the economy grows, the higher the amount of soil pollutants there will be. The chemical fertilizer indicator and GDP per capita were closely associated (equations 5 and 3). Use of chemical fertilizers grows 0.038 per every percentual point of GDP per capita. 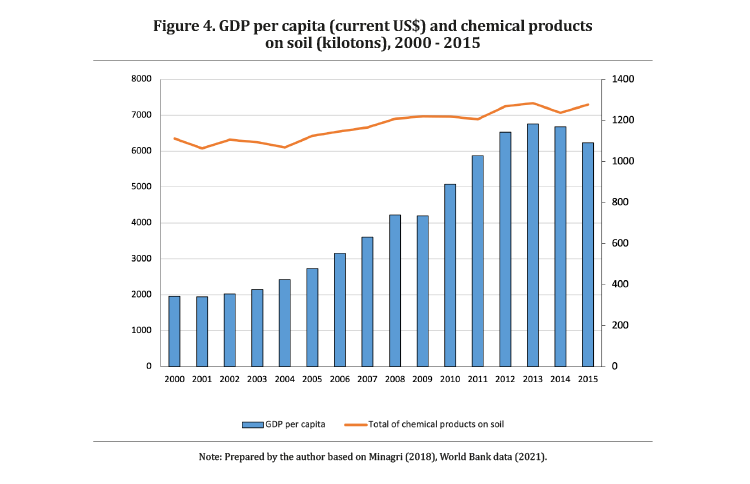 Equations 2 and 4 were estimated to verify an inverted-U relation. Even if the estimators are significant, their value does not provide relevant information that reassures the inverted-U form. 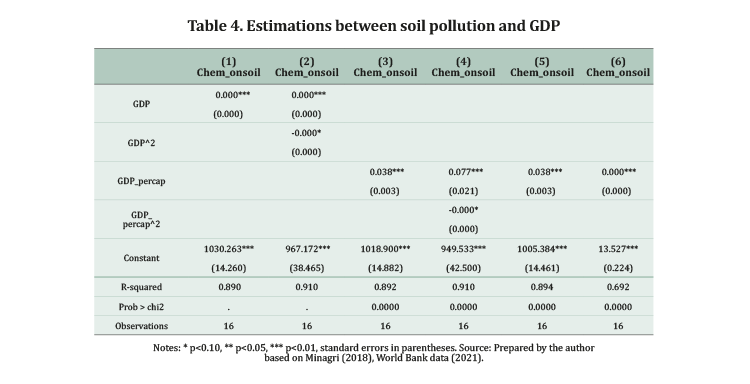 It is important to point out the impacts of chemical products on the soil. On the one hand, fertilizers generate impacts like infertility, acidity, increasing microorganisms and groundwater pollution.

On the other hand, pesticides are the most harmful chemical product. They are available in different presentations depending on the pests to be eliminated. There are insecticides, acaricides, rodenticides, fungicides, bactericides, nematicides, herbicides and molluscicides that even control the population of mollusks (FAO, n.d.). All of these also have negative effects on ecosystems. Environmental contamination by these chemicals is highly toxic. If handled poorly, harvested products could even have residual toxins. In addition, they raise the costs of phytosanitary control (Cisneros, n.d.).

Nevertheless, it is important to recognize that the use of agrochemicals can be moderate by the minimum law of Von Liebeg, which, states that that the local yield of terrestrial plants should be limited by the nutrient that is present in the environment in the least quantity relative to its demands for plant growth (Morris & Blackwood, 2007). This represent a method that cares about soil pollution and should be applied even in industrial agriculture.

Recognizing these two strands, the systemic strand and the holistic strand, drives accountability for food production and consumption. From the government perspective, the promotion of holistic agriculture is the key to ensure food security and reduce land degradation in the mid- and long term. Changing production methods of the private sector is the most difficult, but the government must reorient them through updated policies that consider environmental pressures. From the point of view of consumers, we must demand - collectively or individually- food security taking into account the excess of population growth in the next few years as hunger increases in different ratios in several countries. As a society, we need to reformulate our ways to conceive and engage with nature. This study shows soil pressures, but with climate change, all family farming and rainfed agriculture will be affected and, thus, food security. In Peru, 70% food production is generated by family farming. 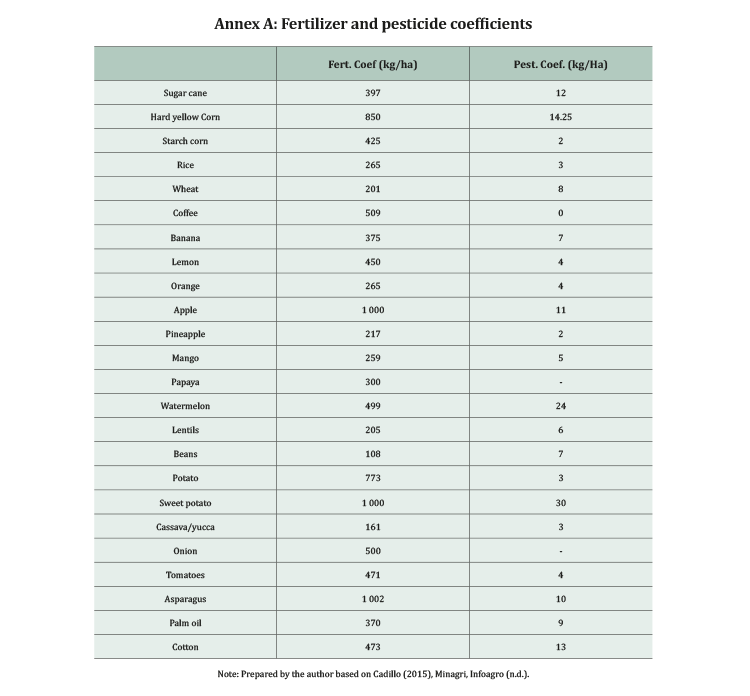 Elliot, S. (n.d.). How much more does organic food cost and why? https://money. howstuffworks.com/personal-finance/budgeting/how-much-more-does- organic-food-cost-and-why.htm